Due in part to the LA Kubb Club’s proximity to Hollywood and the club’s representation in the entertainment industry, it has become quite common these days to find kubb pitches setup in studio back-lots and on filming locations around the world. Few actors have embraced the game as much as Luke Skywalker himself, Mark Hamill. In his contract rider, Hamill always demands a brand new tournament-spec poplar kubb set, from JP’s Backyard Games of Chaska, MN, set up on a regulation pitch within 30 feet of his trailer and is known to pull extras, grips and craft services personnel away from their work in order to play kubb with him in the downtime between his scenes. He attributes what he considers to be his outstanding acting ability to the meditative experience of playing one-on-one kubb just before a take.

Hamill can be seen in this March 2016 photo playing kubb with Star Wars co-star Daisy Ridley atop Ireland’s Skellig Michael island during filming of Star Wars Episode VIII: The Last Jedi. Ridley has just lost the king toss and is handing Hamill his fourth baton.

Not everyone shares the actor’s love of the game, however. As is made clear by her facial expression in the photograph, Ridley (who’s character, Rey, represents the new generation of protagonists in the blockbuster sci-fi series) is frequently annoyed at the distraction of having to play Hamill during principal photography. “If this guy spent half as much time working on his acting as he does on his drilling, he might not be such a hack,” vented an exasperated Ridley during a recent shoot in the Moroccan desert. “…you’re not going to print that, right?”

Assuming reshoots have wrapped by then, Hamill is expected to make another appearance at the West Coast Kubb Championships in South Pasadena on April 23rd 2017 with teammate and fellow uncastable Star Wars alum, Hayden Christensen.

In October, 1862 President Abraham Lincoln visited General George McClellan’s camp of the Army of the Potomac not long after the Battle of Antietam. Pictured here playing kubb are Union Army intelligence officer Alan Pinkerton, President Lincoln and General John McClernand – a team the president would playfully refer to as “Lincoln’s Log Lobbers.” While the photo doesn’t show the opposing team, declassified Civil War-era documents have led historians to believe that in this match the “Lobbers” soundly defeated General McClellan and two unnamed lieutenants in a quick best-of-three contest in which Pinkerton’s world-renowned inkasting skills proved decisive.

The Union Army’s strategic victory at the battle of Antietam is widely attributed to the unseasonably cold weather that September. Unaccustomed to fighting in such conditions, the Confederate army suffered many colds and pulled hamstrings, giving the North a considerable advantage. That cold weather persisted into October as evident in this photo, where Pinkerton and McClernand can be seen keeping their baton throwing hands warm inside their coats.

While much has been written about Lincoln’s childhood, early career and presidency, an often-overlooked but critical factor in his success as a statesman was his love of kubb. As biographer Doris Kearns Goodwin explains in her book “Team of Rivals,” Lincoln often used kubb as a pretext to bring opponents together and was even known to hold cabinet meetings over friendly matches on a pair of pitches he had staked out on the White House’s south lawn. The “Lincoln Pitches,” as they came to be known, were used for recreation and diplomacy by every president except FDR until 1971, when Richard Nixon, paranoid that kubb’s Scandinavian roots made it a “Socialist” game, had the area converted into a rose garden.

Fun fact: Lincoln always carried two batons and a staked practice kubb under his hat and would often instruct his carriage driver to pull over when passing a particularly fine patch of lawn so that he could get out and practice his 8 meter throws.

Once the premier kubb event in Southern California, the LA Kubb Club’s Malibu Celebrity Classic turned out the stars and kubb greats alike in support of good causes year after year for decades. The 2003 winning team of Oscar-nominated actor Bill Murray and global kubb evangelist Joe Zenas (pictured here hoisting the “Krystal King”) were no strangers to the podium having won first place a record five times! At this event, the pair had just narrowly edged out crowd favorites Betty White and Evan Fitzgerald in a grueling 2-1 match that lasted nearly three hours and was delayed repeatedly due to injury time-outs for the aging actress.

Sadly, Murray’s kubb career was cut short when, shortly after this picture was taken a wild helicopter thrown by local amateur Kris Johnson glanced off a corner stake and struck his shin, shattering the actor’s tibia. Unable to walk for months afterwards, Murray was forced to take an off-screen role voicing Garfield the cat in the 2004 animated film of the the same name and it’s 2006 sequel, “Garfield: A Tail of Two Kitties.” Both films were critical and box-office failures and to this day, Murray blames Johnson for this devastating downturn in his career.

Since the Murray injury and his subsequent departure from the sport, the Celebrity Classic has gradually lost support in Hollywood and has been eclipsed on the tour circuit by South Pasadena’s annual West Coast Kubb Championship – which attracts serious kubbers from around the globe. The celebrity tournament is still held every few years as a fundraiser, however, with proceeds going to combat the black-market trade in kubb sets made from the endangered California Redwood. 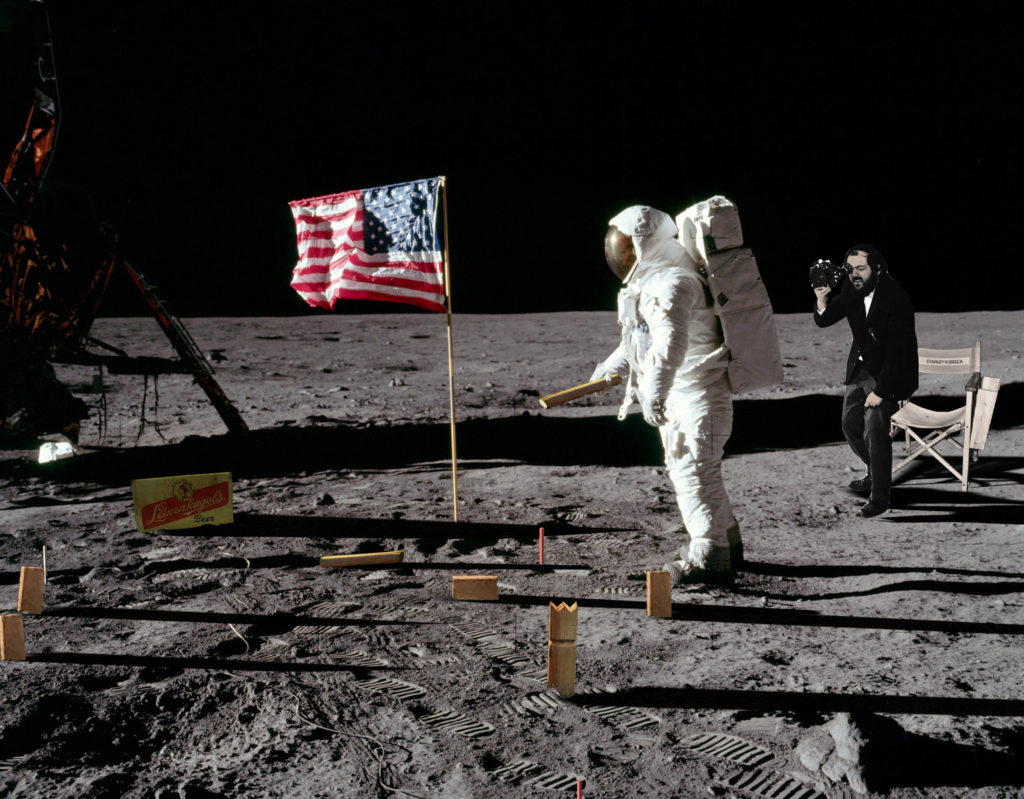 Conspiracy theorists worldwide rejoiced today at the discovery of this photo that appears to confirm a long-held suspicion that the 1969 Apollo 11 moon landing was in fact a hoax. The photo of director Stanley Kubrick on a sound stage, released late Wednesday on the website Wikileaks, shows the Academy Award-winning director in a setting that is visually consistent with known photos and video footage released by NASA at the time.

The image shows what appears to be an actor portraying astronaut Neil Armstrong playing a game of kubb on set. Kubb historians have suggested that the actor might be a young Jack Nicholson, given his similar build to Armstrong, known love of kubb and preference for drilling on the right.

Nicholson would go on to found the L.A. Kubb Club and has been a frequent finalist in the West Coast Kubb Championship. Neither NASA nor Mr. Nicholson could be reached for comment. 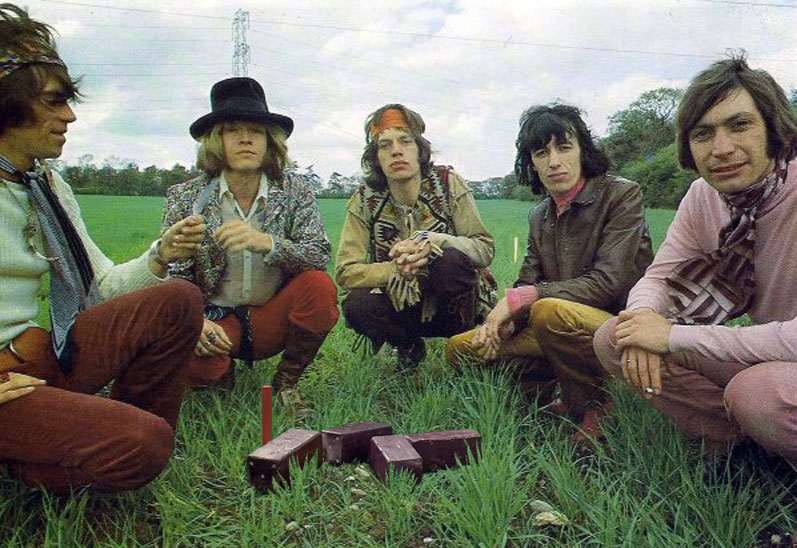 In the final game of the 1968 Brixton Kubb Klassic, the Rolling Stones – seen here huddling over opponent David Gilmour’s very competent drill – eventually lost to Pink Floyd in a long and contentious best-of-5 match. Sadly, the match would be the Floyd’s last as a band, as Roger Waters’ constant and belligerent calling of helicopters and foot-faults resulted in a permanent ban from the league. As Stones drummer and 8-meter powerhouse Charlie Watts remembers, “that cat was just so angry, man.”