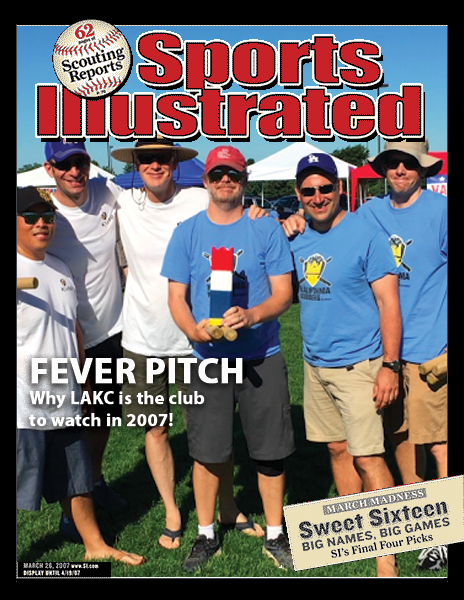 On the eve of the annual US National Kubb Championship, it seems fitting to look back at the historic and tragic 2007 season when the Los Angeles Kubb Club made it’s debut on the national kubb scene.

With all the attention brought by the the LAKC’s feature on the March 2007 Sports Illustrated cover and the countless ESPN profile pieces and interviews, the expectations for how these six kids from SoCal would fair in Eau Claire could not have been higher.  Sadly, their performance at the big dance that summer could not have been poorer.  Until that point, kubb in California had been primarily a beach sport so, totally unaccustomed as they were to playing in the thick Midwestern turf, neither Kubb LA nor the Kalifornia Kubbers won a single game at nationals that year and quickly became the laughing stock of the sports world.

Once all of the ridicule and mocking in the press and online had subsided, the boys from South Pasadena regrouped and began to rebuild their organization as a grass-based league, with the long-term goal of reclaiming their dignity on the national kubb stage.  It wasn’t until 2015 that they dared re-enter competitive tournament play when they returned to Eau Claire for the first time in eight years.  Since then, the LAKC has been slowly building their reputation as humble but competent kubbers who are just happy to be making some friends and throwing some wood.  The club is excited for Nationals this year, though realistic about their chances given a very competitive field.  “Win or lose, we’re gonna chug some brews!” exclaimed Kubb LA driller Marshall Dostal when reached for comment.

LAKC and the 2007 US National Championship