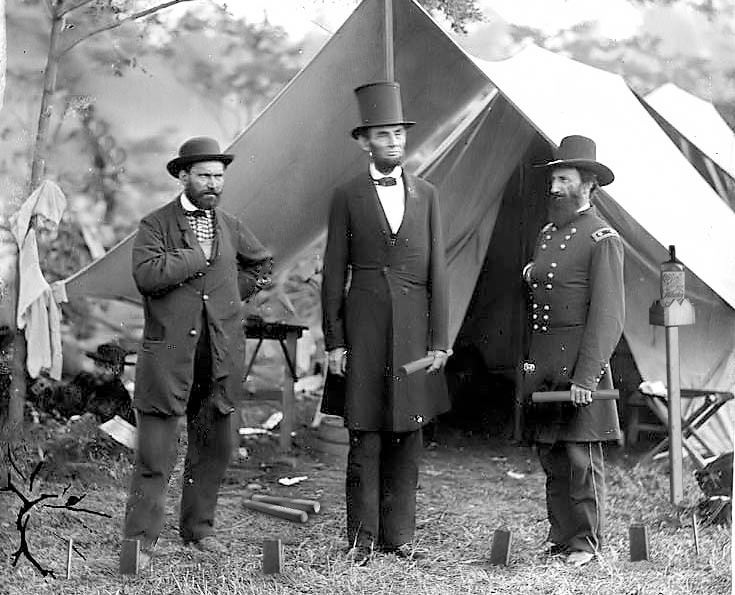 In October, 1862 President Abraham Lincoln visited General George McClellan’s camp of the Army of the Potomac not long after the Battle of Antietam. Pictured here playing kubb are Union Army intelligence officer Alan Pinkerton, President Lincoln and General John McClernand – a team the president would playfully refer to as “Lincoln’s Log Lobbers.” While the photo doesn’t show the opposing team, declassified Civil War-era documents have led historians to believe that in this match the “Lobbers” soundly defeated General McClellan and two unnamed lieutenants in a quick best-of-three contest in which Pinkerton’s world-renowned inkasting skills proved decisive.

The Union Army’s strategic victory at the battle of Antietam is widely attributed to the unseasonably cold weather that September. Unaccustomed to fighting in such conditions, the Confederate army suffered many colds and pulled hamstrings, giving the North a considerable advantage. That cold weather persisted into October as evident in this photo, where Pinkerton and McClernand can be seen keeping their baton throwing hands warm inside their coats.

While much has been written about Lincoln’s childhood, early career and presidency, an often-overlooked but critical factor in his success as a statesman was his love of kubb. As biographer Doris Kearns Goodwin explains in her book “Team of Rivals,” Lincoln often used kubb as a pretext to bring opponents together and was even known to hold cabinet meetings over friendly matches on a pair of pitches he had staked out on the White House’s south lawn. The “Lincoln Pitches,” as they came to be known, were used for recreation and diplomacy by every president except FDR until 1971, when Richard Nixon, paranoid that kubb’s Scandinavian roots made it a “Socialist” game, had the area converted into a rose garden.

Fun fact: Lincoln always carried two batons and a staked practice kubb under his hat and would often instruct his carriage driver to pull over when passing a particularly fine patch of lawn so that he could get out and practice his 8 meter throws.